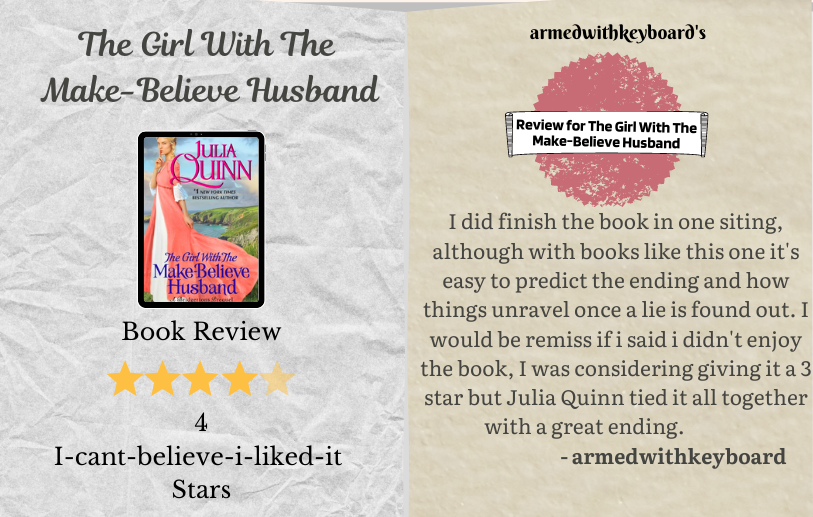 Rokesby may have been published after the Bridgerton series but it is a prequel and the Rokesby men are actually quite sweet when you compare them to the Bridgertons. I didn't actually like some things the Bridgerton Men did, two examples of that were Anthony's treatment of Kate and Benedict's of sophie, oh they apologized when it was convenient for them but it's not something we look for in our romance book heroes. Those moments made them certainly less than they should have been.

I don't particularly enjoy books that start with a lie, because when it's found out there's a lot of commotion and heartbreak involved. Pretty sure if the heroine, one Cecelia Harcourt had confided in Edward he would have agreed to the charade or even gotten married to her and they would have eventually fallen in love.

But that wouldn't have been a memorable story now, would it? Regardless of my personal opinions, the story has to be told the way it happens and Julia Quinn certainly does that.

Will I read it again, probably for the sake of continuity, but it didn't make much of an impression and isn't as strong as the previous book. I do love the book title though.

Edward and Cecelia do make an adorable couple, even after Edward finds out Cecelia has lied he doesn't explode like any of us would. He tries to put his anger aside but situations goes to worst. I do enjoy the ending, i had hoped that Cecilia would reach all the way home and then Edward would sulk and think about the letter she left behind. I wonder what Cecelia's journey back home would have been like, especially when you add Miss Finch back in the mix.

Major Spoiler:
Thomas Harcourt doesn't survive. I kept hoping that it was all a ruse and that he is a spy for the country and we'll see him again, but that's just a wishful thinking on my part. But still he could be.Most of all I wanted him to be alive for Cecilia. It felt as if all would be better if she had her brother back.

View all my reviews

Find out what's in store for the other characters with these quick Bridgertons TV Series Spoilers : Season 2 and Beyond (Read at your own Peril!)
book series Books Bridgerton Series Julia Quinn quick reviews Rokesbys Spectacular Book Reviews