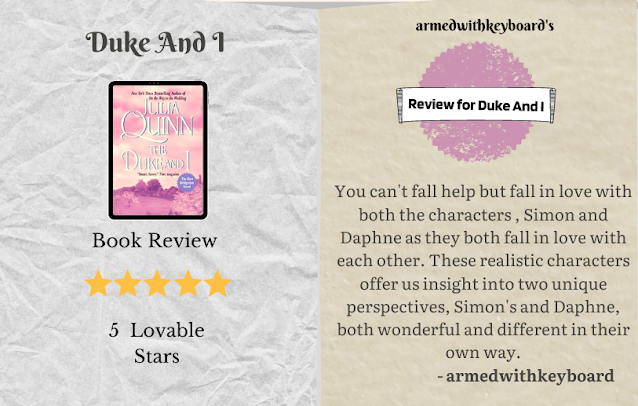 Before we head over to the review, here's a fun quiz:

Can you guess the names of all the Bridgerton siblings based on the happenings in Duke and I?

This is a re-read. Haven't read it in a while because i haven't binge read Victorian romance in a while, but this damn Netflix show had me cravings the books.

And there's no way i was going to watch the show before reading the entire series. 😁

I hate When people take too long to realize they have messed up and even once they do they'll sit on their hands until a third party puts them into motion.

From someone who doesn't have a maternal gene, i was frustrated with Simon Basset for not wanting kids even though I agreed with him.

Daff like most heroine decided that she could change the rake. That's a risk and even when things work out it takes a while and in between there are a lot of hurt feelings.

I do enjoy the rest of the Bridgerton brood. 😂 That's the best part about a book series. You get to see the siblings grow up and come into their own. Yes, I called them brood. This book reminds me a lot of Devil's Bride by Stephanie Laurens. It is another great book. Not because there is much similarity in plot or story but simply because it is just as well-written and compelling. If you don't already have your copy of Duke And I:

Get it on Amazon-United States

Get it on Amazon- India

Find out what's in store for the other characters with these quick Bridgertons TV Series Spoilers : Season 2 and Beyond (Read at your own Peril!)
Book Quiz Books Bridgerton Series Duke and I Julia Quinn Spectacular Book Reviews